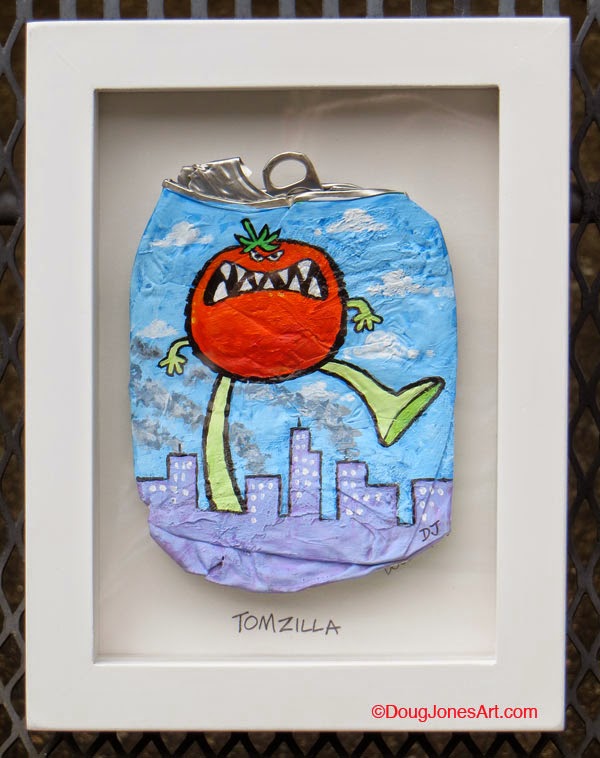 "Tomzilla" acrylic on crushed can 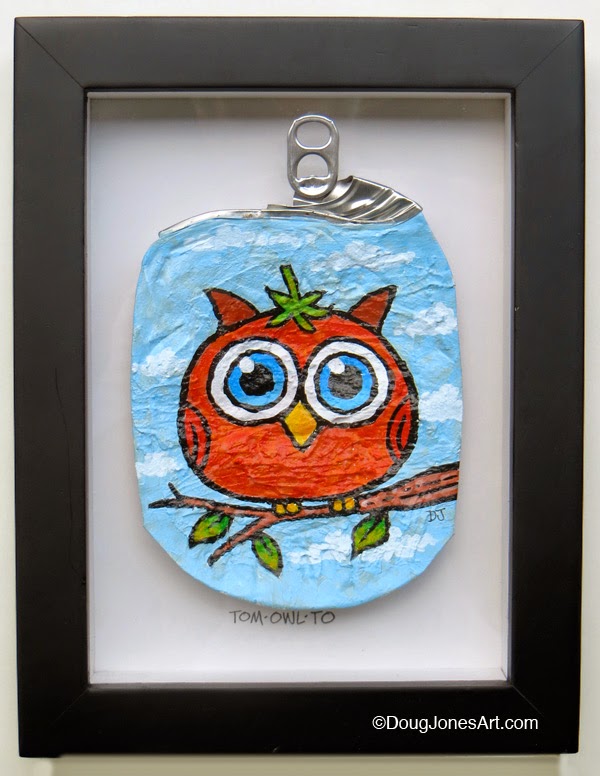 "Tom-OWL-to" acrylic on crushed can 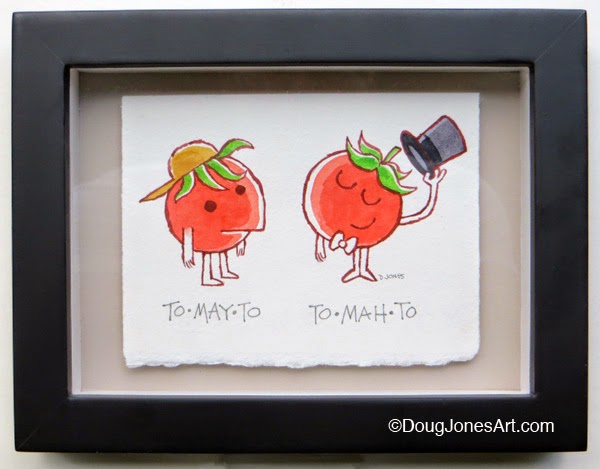 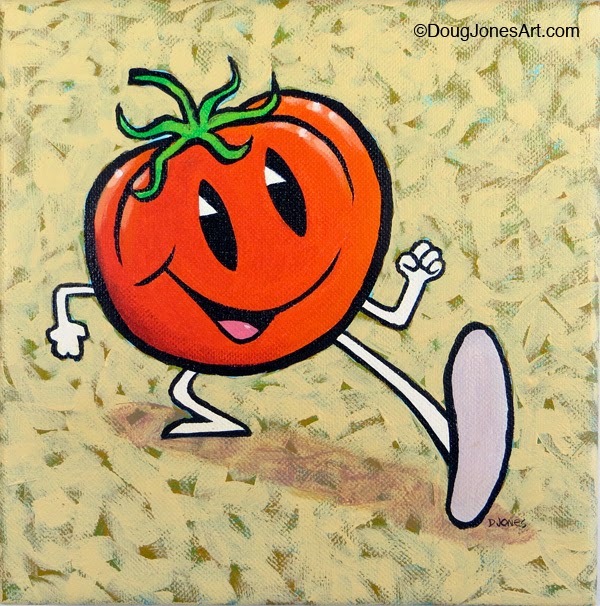 I am participating in the Nashville Tomato Arts Festival in Nashville this weekend. Here are the 4 paintings  (tomato related) that will be in the Art And Invention gallery. 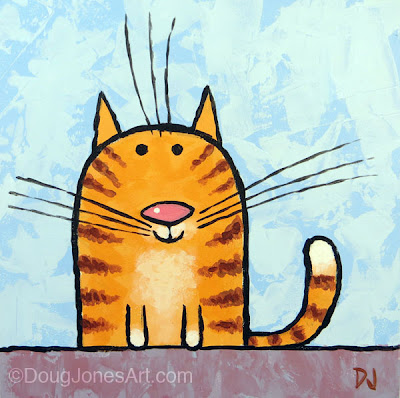 Nope... rumors that I am dead are not true. I just have not posted in a while. Here is a little kitty cat that can be yours. You will not have to feed him or clean the litter box.
Just hang him on a wall and enjoy.
CLICK HERE TO BUY 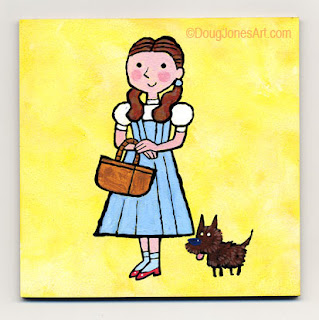 4x4 acrylic on board

Yep, I'm still around. I have been busy with an assignment and then taxes came along. Now all that is over and maybe I can paint more. In the mean time I ran across some Ampersand Gessobord in an art store and thought I would give it a try. It is so smooth compared to painting on canvas. I had the idea of painting all the characters from the Wizard Of Oz on them. Of course I have to start with Dorothy. 4" by 4" is really small, though. Now I am wondering about painting them larger on the wrapped canvas I had been using. So many decisions! 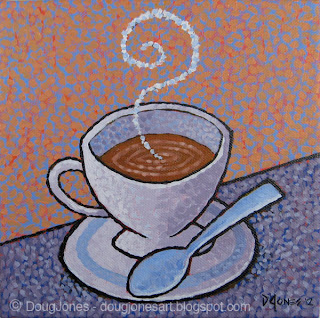 Another cup of coffee. I have had this painting sitting around for a while. I didn't really plan on all the dots... it just happened. I keep looking at the painting and thinking of ways to change it so the dots are not so abundant... but then talk myself out of making any changes. I can't really decide if I like all the dots or if I don't. Welcome to my world of indecision. I think since I can't really envision what kind of change I would make to this, it will remain as it is for now. Any thoughts out there from the internets blogosphere? 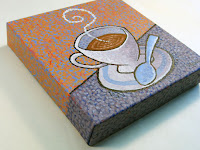 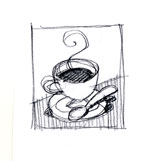 When I look at this too long I imagine my eyes are tingling... so maybe that is like a little coffee buzz, eh? 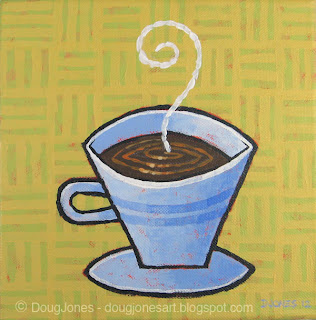 Fluid of choice? How about a little Cup o' Joe? I like the way the underpainting breaks through in places. I may do a series of coffee cups. We'll see... 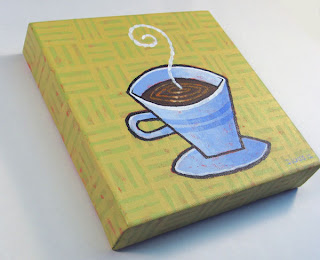 Here is another view
Posted by Doug at 8:18 AM 3 comments: 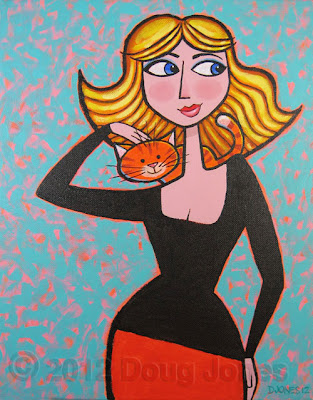 Here is the latest painting I have been working on. I had it about 90% done and then had to think about it for a few days. I finally decided on what to do on the background. I painted a bluegreen over the orange underpainting... and liked it. Whew! If I didn't like it, I would be in deep doo doo... for there is no command Z when you are painting.

The pose for this painting was inspired by a pretty famous image. But this time I am not telling. If anyone can guess what it is, you will win a fabulous prize. To be determined later. Much later. Much, much, much later. 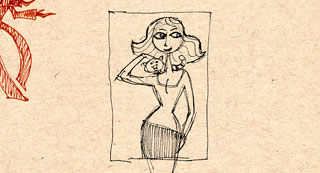 This is the little sketch I did after seeing the inspiring image. I thought painting a lady would be fun and the addition of a cat just makes it even better.

So... it is February. I have had this blog up and running for over a month now. I am happy to be making at least a painting a week. I wish I had time for more but this is OK for now. AND... I have 10 of the most intelligent, most awesome, most sophisticated people on the planet that have clicked to follow this blog. You know who you are. Thanks. 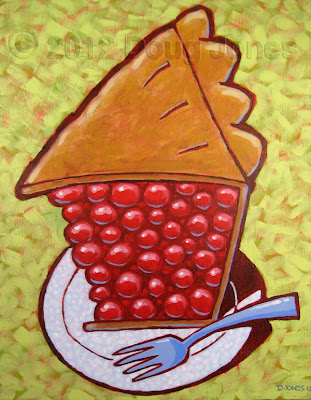 How about a tall slice of cherry pie? My mom makes a mean cherry pie. When I am visiting her in Missouri, I can usually look forward to some pie. If there is any still around the next morning, then my breakfast will be a slice of cherry pie and coffee. Mmmm...

There seems to be a strange resemblance of my pie and a chicken head. Do you see it? I was told this twice by different family members. Yep, we have a 6th sense. We don't see dead people... we see chicken heads!

For several years I went out with a group of artists and tried my hand at plein-air painting. I learned several things doing that. I learned about using a limited palette and mixing colors, I learned about composition, I learned that you had to make a plan and paint quickly because the light was constantly changing... and I learned that painting landscapes just did not click with me. It didn't make my socks go up and down.  : )

As an illustrator, I have been putting a black line around things and tweaking images all my life... so I figured why stop now?  For me (at least at this point) it is a lot more fun to warp things and use odd perspective than it is to paint things realistically. So for now, that's what I'm doing. Doug just wants to have fun! I watched a great video recently of Ed Emberley. I have watched it several times. It inspires me. In it, Ed talks about doing what is fun and hoping other similar folks will find it fun too. I think that is my plan too. If you would like to watch the video just click HERE. 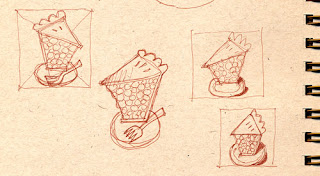 Doug
I like to draw stuff and paint with watercolors

All images are © Doug Jones. Please do not use these images without permission. Thanks.